This fall was a wonderful time to sail in the great state of Texas! We had two scheduled District Regattas, first Hood at Houston Yacht Club and second Wurstfest at Lake Canyon Yacht Club, our district Championship.
We had 9 boats in attendance at Hood with Andres Boccalandro of Houston Yacht Club dominating with 8 points after 5 races. Close behind was Raleigh Christman of nearby Seabrook Sailing Club with 13 points and Dave Ryden rounding out the top 3.
Next, the fleet moved onto Wurstfest on the first weekend of November. Turnout was strong with 20 boats in attendance including 2 boats from Colorado and one from Arizona. Conditions on Saturday were extremely light and variable, with the race committee impressively running 3 races. There were some shifts of 90+ degrees and complete dead spots on the race course so no lead was certain. Sunday was much more cooperative with winds of 10-20 proving a much needed change from the previous days conditions. Winning both the regatta and the 2019 series was Griffin Orr of the Corinthian Sailing Club followed by Ethan Froleich of Austin Yacht Club and Doug Peckover in the full rigs. In Radials, Aubin Hattendorf of Corinthian Sailing Club dominated with Cameron Colonna and Caleb Fogle rounding out the top 3. This year we were also able to present the Iron Man trophy to Craig Berleme. The Iron Man trophy is awarded to the individual who attended every regatta on the circuit schedule.
Moving into 2020, we start the year with the fourth annual Rock the Ice Regatta at the Corinthian Sailing Club on January 25/26! Looking forward to seeing everyone on the water soon!
Category: Uncategorized |
wpmonkey | October 4, 2019
No comments

District 15 enjoyed a hot summer in Texas by kicking things off with the 2019 Summer Solstice Regatta at the Seabrook Sailing Club on the Gulf Coast. Competitors were greeted by windy conditions and fun waves for surfing. Out of the nearly 20 boats participating, the regatta was won by Raleigh Christman with Craig Berleme and Griffin Orr rounding out the top 3.

Next, sailors escaped the Texas heat to participate in the Colorado Laser Championships held on Grand Lake. Though not in the Texas district, we managed to convince 8 Texas sailors to make the 14 hour trip and brought back First (Griffin Orr, Third (Eric Roman), and top master (Craig Berleme)

Moving into the fall, we have two circuit regattas scheduled. First and new to our calendar is the HOOD regatta hosted by the Houston Yacht Club on September 21st and 22nd. This is new to the circuit following HYC’s hosting of the Nationals last year.

Last, but not least is the Wurstfest Regatta, our district championship, held on Lake Canyon the first weekend of November. We will be having a brief district meeting Saturday after racing. Sail Fast!

District 15 started out the spring season by sailing at the Austin Yacht Club Easter Regatta hosted by the one and only Fred Schroth! Lake Travis was once again 100% full to the delight of the sailors! Day 1 was light and shifty with a few good runs of wind lasting the race day. Sunday was a very different story with high winds peaking into the low thirties. The “Fred” course (Windward-Leeward-Windward-Reach-Windward-Leeward-windward), provided quite the challenge for all sailors involved. After one race, the race committee decided to call it as a great number of boats were either upside down or damaged. Ryan Minth  came out victorious with a fantastic regatta. 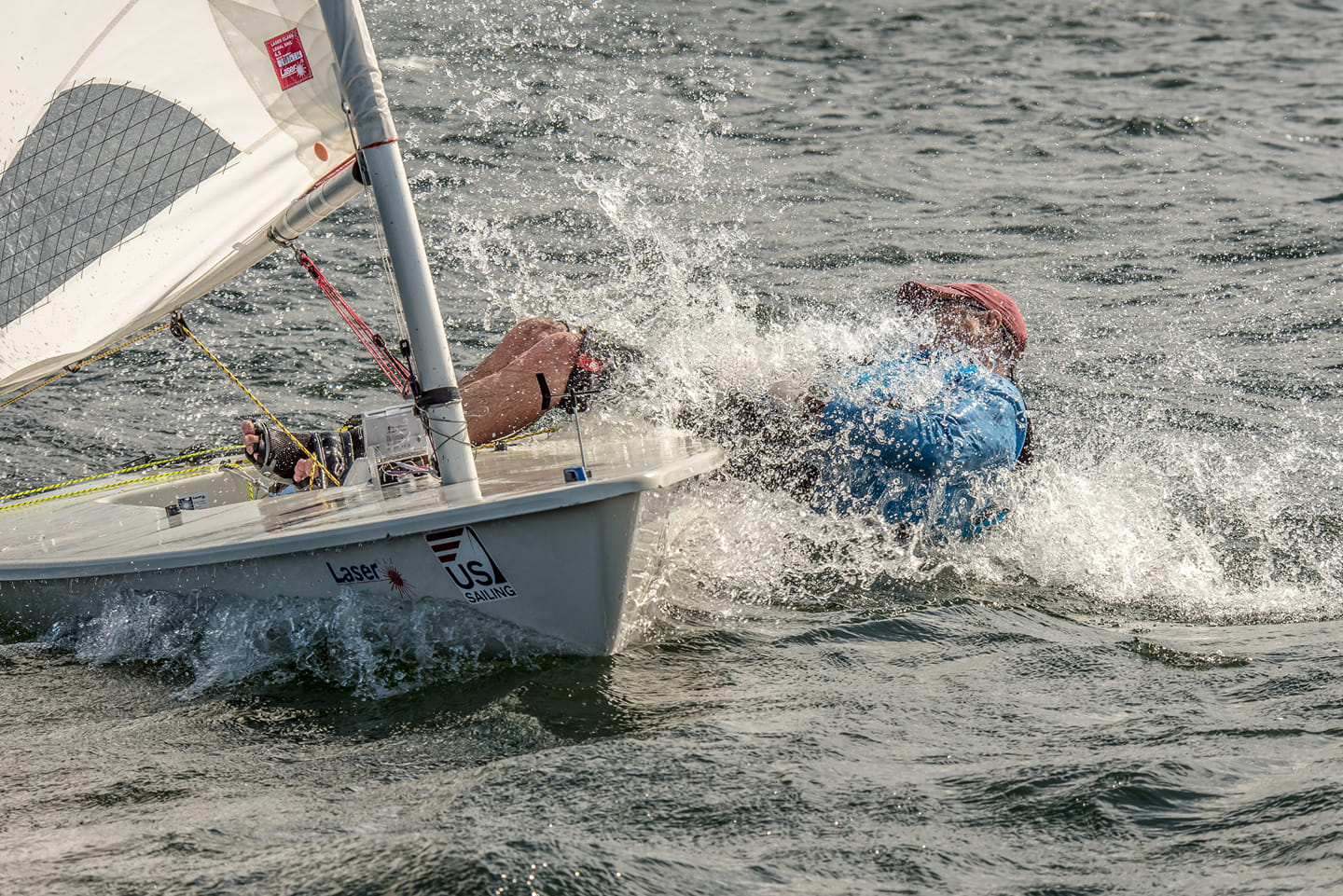 Next, we moved on to the Seabrook Summer Solstice where sailors were once again greeted with fantastic conditions with 10-20 knots of breeze both days. Raleigh Christman was unstoppable the whole regatta, finishing with nearly half the scores of second and third!

Next up, we head to HOOD at HYC on September 21/22, Arlingtons Laserpalooza on October 5/6 and lastly our district championship, Wurstfest, on November 3/4! On a side note many from Dallas will be attending the Colorado Laser Championships on August 16/17 to avoid the grueling summer heat of Texas. Reach out to secretary@d15.org if you would like to learn more.

In Texas the 2019 season got off to an early start with the 3rd annual Rock the Ice Regatta, hosted by the Corinthian Sailing Club in Dallas. Though the wind was light, the temperatures were warm, providing the competitors a much needed respite from the winter cold! We had several competitors come from outside our district, with one from Oklahoma City and another from Traverse City, Michigan.
By the end of the event, we had 6 races between the 19 competitors. Finishing third was a Eric Roman, in second Doug Peckover, and taking first was Griffin Orr winning 5/6 races.
Next, the Texas Fleet moves onto the annual Easter Laser Regatta held on Lake Travis by the Austin Yacht Club and none other than the Easter Bunny himself!! For those of you who do know Easter is April 20/21, so just over a month away!! Following the floods of last fall, Lake Travis is currently sitting 6 inches above full, so prepare for a full lake and fair winds!!
Not too long after Easter, we move down to the Gulf Coast for the Seabrook Summer Solstice regatta held June 22/23 at the Seabrook Sailing Club. Expect great breeze, waves, and unmatched hospitality at this regatta! Not one to miss!!
Category: Uncategorized |
wpmonkey | December 17, 2018
No comments

The Texas District 15 finished off 2018 strong with two great events! The first was Arlington Yacht Clubs LaserPalooza featuring AeroRama. This was held at the beautiful Lake Arlington at Richard Simpson Park with over 20 boats in attendance. Unfortunately the wind was light Saturday with puffs of 5-8 coming down a course that was otherwise only about 3 knots. The strategy was to find the dark water and sail to it fast! There was no racing Sunday as there was even less breeze, though there were some fun pirate games under AP. Christopher Breland finished first followed by Griffin Orr and Eric Roman.

Next up, we travelled to Wurstfest on Lake Canyon near San Antonio. Here, Sailors were greeted by the most spectacular winds of the season, averaging 25 knots and gusting to 35!! Capsizes were a plenty, but most of the fleets still managed to finish every race. In all, four races were held Saturday with another 2 in much lighter conditions on Sunday. First in the Full rigs was Bryan Trammell and Lillian Meyers in the Radial Fleet!

Next up, we start the year with the Annual a Rock the Ice Regatta out of the Corinthian Sailing Club in Dallas. This will be held the last weekend of January (26/27)Expect a strong group of sailors, warm hospitality and cool temperatures for this one!

Though Summer in Texas is hot, we did have two fantastic regattas on our circuit, the Seabrook Summer Solstice and the Arlington Laserpalooza Regattas. On day 1 of the summer solstice, conditions had winds from the south at 15-20 with 1-3 foot waves which provided some very exciting reaches and downwind legs offered by the Olympic courses. Wipeouts were a plenty across the fleet, with those able to sail a clean race all but guaranteed a top half finish. Day 2 was much the same with two more Olympic courses with some more drastic shifts that made no lead guaranteed. Rounding out the top three overall were Doug Peckover, Craig Berleme and Fred Shroth.
We were also fortunate to have a local nationals, held at Houston Yacht Club. A variety of conditions were sailed and the Texas district was well represented, especially in the full rig masters and junior radials divisions.
Next, we moved onto the Arlington Laserpalooza Regatta, which showed us very light conditions with only pirate games on Sunday due to lack of breeze. However the race committee was committed to getting races in when they could, resulting in four fair races on Saturday with Cristopher Breland, Griffin Orr, and Eric Roman on the podium.
To end our season, we travel to Wurstfest on beautiful Canyon Lake the first weekend of November for our last regatta of the year and district championship. See y’all on the Water!
Category: Uncategorized |
wpmonkey | August 17, 2018
No comments

NOR and Registration Posted for LaserPalooza at Arlington

Come join us at our next district event, Alington’s Laserpalooza September 15/16th on Lake Arlington hosted by Arlington Yacht Club.

The Seabrook Summer Solstice was a resounding success with great wind both days, providing all sailors an exciting challenge! Top finishers were Doug Peckover, Craig Berleme, and Fred Scroth! Full Results Below:

Also check out the Dallas Laser Fleets writeup of the event:

Dallas Sailors made their way to he a Seabrook Summer Solstice on Galveston Bay this past weekend to sail in exceptional conditions against some of the top sailors in Texas. In attendance from DLF were Griffin O, Alex G, Tim P, Christof B, Eric R. On day 1  conditions were winds from the south at 15-20 with 1-3 foot waves which provided some very exciting reaches and downwind legs offered by the Olympic courses. Wipeouts were a plenty across the fleet, with those able to sail a clean race all but guaranteed a top half finish. Day 2 was much the same with two more Olympic courses with some more drastic shifts that made no lead guaranteed.

There were a few incidents, however, with Christof cutting his leg on day one which put him out of commission for the rest of the regatta. (Infections are to be avoided at all cost on Galveston bay). Alex showed up with a tiller extension that looked like a banana and despite calls from competitors to find a better one, he proceeded to sail out and break it in half on the last leg of the first race!! Lastly Griffin was sailing out to the racecourse on day two when his gudgoen fell off. Thankfully, he was able to sail in and fix the issue before making it back out to make the second start with 3 minutes to spare!

Updated NOR for the Lake Conroe Spring Fling

The Lake Conroe Spring Fling is fast approaching on April 28/29th. Please see the Latest NOR below! Excellent sailing, camping, and company will be found at this event! See y’all there!

2018 Easter Regatta Results and Pictures are Up!!

The D15 Laser Sailors had an Absolute Blast at this years Easter Regatta hosted by the Austin Yacht Club and the Easter Bunny himself!